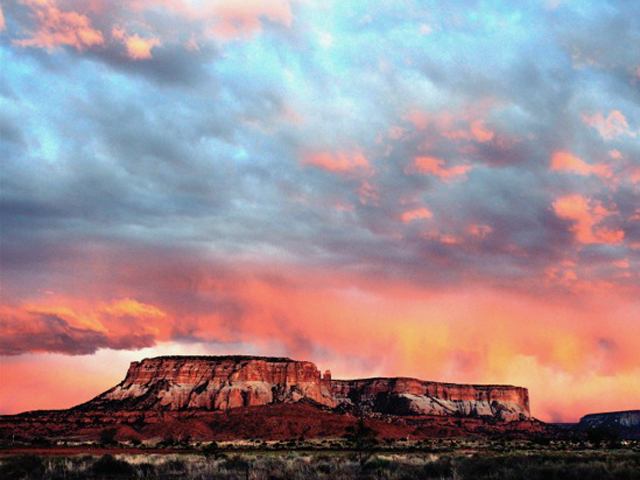 Zuni Pueblo, also referred to as Halona: Idiwan’a (the Middle Place), is nestled in a scenic valley, surrounded by enchanting mesas, about 150 miles west of Albuquerque. The main reservation is located in both McKinley and Cibola counties in the western part of New Mexico, often referred to as the “Four Corners” region and encompasses roughly 450,000 acres. Zuni Pueblo has additional land holdings in Catron County, New Mexico and Apache County, Arizona, which do not adjoin to the main reservation. Elevations range from nearly 8,000 feet on the western slope of the Continental Divide to about 6,000 feet in other areas, Zuni lands host a variety of habitats and natural resources.

Zuni Pueblo is one of the oldest continuously inhabited settlements in North America. The Pueblo itself has been inhabited since at least 1300, although the A:shiwi (Zuni people) and their ancestors have lived in the larger region for millennia. It was one of the first places contacted by outsiders during the Spanish expeditions into the region in 1540.

The A:shiwi speak Shiwi’ma (the Zunian language), a linguistic isolate. Shiwi’ma is spoken by a majority of individuals in Zuni Pueblo. The language is taught within the Zuni schools and is also actively spoken at home and in public environments. It is a highly literal and descriptive language with a wide variety of compound words (such as k’yakwen ladaba, translated as “house with wings” – airplane; or ts’ina: i:shokwinne, translated as “pages/papers folded together” – book) along with many borrowed words from other languages, including Spanish and neighboring tribes. There is even a Shiwi’ma A:beye:na:kwe’ Wokkwinne (Zuni Language Speakers) group page on Facebook, which is an informal gathering place where Shiwi’ma speakers of all ages and levels can ask questions about particular word spellings and meanings. Though considered to be one of the most traditional of the Puebloan tribes, Zuni does utilize technology, social media and other means to keep their one-of-a-kind language alive and well.

Zuni has evolved traditionally along indigenous practices and is not a typical western grid city. Zuni’s MainStreet features a mix of public, commercial, and residential places. It does not have a typical commercial district or a downtown. Instead, MainStreet skirts and separates the traditional Middle Village historic district from the rest of the more modern Pueblo. The traditional Middle Village is a culturally vibrant area utilized year-round for cultural and ceremonial events that follow a ceremonial cycle. Visitors to the village must respect these events, which sometimes requires closing the area to outsiders.